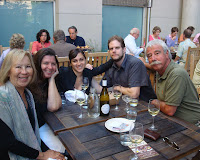 The Kids are All Right

Last month we traveled up to see Daughter in the Bay area. I highly recommend having your children go away to school someplace interesting that you might want to visit over the years, since frequently they seem to remain there even after graduation. It’s a good return on investment. In her case it was Berkeley. Berkeley is, as we who love food understand, the center of the universe for foodies, having as it does the famous Alice Waters of Chez Panisse, among other good things. But, I digress.

Instead of doing “staycations” this year we are doing mini-vacations at intervals. Going to see Bonnie and her partner, Jeff, was a handy excuse. We stayed at a large hotel and spa in the Berkeley Hills called the Claremont; one of those old, classic looking places that give you a sense of being old money, if only for the weekend. We were familiar with the area in which the hotel is located and that is part of the attraction. The daughter used to live in a co-op nearby and I got used to being able, when I stayed over, to amble over to Peets Coffee and the Bread Garden, an amazing organic bakery with brioche and other good things. And a bit further down the road is the Elmwood area, a couple of blocks of clever shops, food emporiums, coffee places and restaurants. We noted that if we lived in Berkeley that’s the area where we would want to live.

The purpose of the visit was seeing the kids, but it provided us with a chance to stay in a nice place (with fabulous Bay views) and indulge in some good meals. And, it always nice to get away, even if just for a short while.
We got into town on Saturday and Bonnie and Jeff came up to the hotel at dinner time and from there we walked the approximately ½ mile to Elmwood for a casual Italian meal. It was one of the small local places and good while not particularly notable. Although we did have pizza as an appetizer and I think you can’t go too far wrong when there’s pizza.

The next morning we went to Jeff and Bonnie’s place for brunch. She has perfected the art of brunch. They live in a small house that doesn’t have a lot of space inside but does have a large yard and mature trees which are perfect for outdoor meals. So she tells me that brunch works out well for entertaining their friends. And in that process, she has developed a lot of good recipes. Our brunch consisted of a lovely egg bake, a savory dish, assorted breads, a fruit salad and a choice of mimosa or plain prosecco as well as coffee to drink.
They have a lot of friends that we have become familiar with over the years and one of them. a lovely woman named Maggie, came by when we were there and brought some fresh pastries. Since they live in an area that has such a good food emphasis, everything was as fresh and delicious as you could ask for.

That evening included Nicole and we went to a new restaurant named Gather in Berkeley that is garnering attention for its emphasis on locally produced foodstuffs. That's us sitting in the patio with all our food already eaten. They feature a lot of vegetarian and vegan or gluten free items which are identified as such on the menu. However they also have a couple of meat and fish dishes for those who would eat that and everything is organic. Their emphasis is on knowing the provenance of each item featured on the menu, and letting diners know that as well. After all, we should know where are food comes from, shouldn’t we? The New York Times review states “Gather has the feel of a Michael Pollan book come to life” which pretty much says it all. Their website lists their purveyors for anyone who would ask. I don’t need to specify all our dinner selections but I must mention our starter which was so unusual I can’t not think about it. It was a vegetable charcuterie, which I acknowledge is an oxymoron since charcuterie is meat. This consisted of a plate with five appetizer type selections each consisting of different sorts of vegetables and sauces. For example, one was a sort of roasted eggplant and one was something with zucchinis, one was mushrooms etc. All were cooked in some interesting way with sauces and other ingredients which made them hard to easily identify but all very delicious. In my ideal world those kinds of vegetable dishes would be available at every restaurant but I do realize that’s unrealistic. Unless we move to the Bay area or New York City or someplace like that, that is.
It was a good to spend time with the kids and to getaway and I came away with the recipe for Bonnie’s egg bake. I haven’t made it yet but I plan to one day as it was delicious and unique, with its crust made from shredded potatoes. The kids are very social and have interesting and lovely friends and I love their idea of brunch as a way to entertain when there is limited space. It is less expensive than dinner and works well for people who might live a distance away. And, I enjoy champagne and prosecco, both of which are uniquely suited for brunches, with or without the addition of juice.


Hashed Browns Quiche
This calls for a cast-iron skillet, but it can also be made in a quiche pan or pie plate. Just transfer the potato mixture from the skillet and press it over the bottom and up the sides. Can be servedwith sliced tomatoes garnished with parsley.
2 tablespoons vegetable oil
1 medium-size onion, finely chopped (1/2 cup)
5 medium-size potatoes, (1½ pounds), scrubbed and shredded (see Note)
3 large eggs
1½ cups heavy cream or one 12-ounce can evaporated milk
1/2 teaspoon dry mustard
Freshly ground pepper to taste
4 ounces sharp Cheddar cheese, shredded (1 cup)Bonnie substituted smoked cheese
3 tablespoons chopped fresh parsley Paprika
2 tablespoons grated Parmesan cheese
1.
1. Heat oil in a cast-iron skillet. Add onion and cook until translucent. Add potatoes, cover skillet with a lid and cook 5 to 7 minutes over low heat, stirring 2 or 3 times until potatoes are translucent and slightly browned.
2. Meanwhile whisk eggs, cream, soy sauce, mustard and pepper in a bowl or process in a food processor or blender until smooth.
3. Heat oven to 350°F.
4. Remove skillet from heat. Using a spatula or wooden spoon, press potatoes over bottom and up sides like a pie crust. Pour egg mixture into crust. Sprinkle evenly with Cheddar cheese, chopped parsley, paprika, then Parmesan cheese.
5. Bake 40 to 45 minutes until filling is set, crust is browned and cheese is bubbly. Cut in wedges to serve.
• Makes 6 servings.
NOTE: substitute packaged shredded potatoes
Posted by Tasting... at 4:09 PM No comments:
Newer Posts Older Posts Home
Subscribe to: Posts (Atom)

Tasting...
When not reflecting upon food,I primarily walk and read a lot, not necessarily at the same time. With the rest of my time I volunteer at my local library and also at a beautiful state beach named Crystal Cove. I read a lot of books that have to do with food and cooking, not just cookbooks and essays but novels too. There is something very comforting in this sort of writing. I do appreciate my readers (can I say that without sounding pretentious?) and would love to hear comments from any of you who are so inclined.